Step Two (2) of this is little blondino, now in a little footprint but still with that GREAT tone and feel! Added to this also an internal, switchable, high quality, discrete (PACO) buffer.

little blondino—when you need overdrive sounds with the DNA of FETTO Nord 70+ in a smaller size and without most “extras”—anything from crunchy into punchy into singing/roaring—all the way amp sounding, touch sensitive—70’s influenced tones here we go go go!

Screen print may be black, may be grey…

In the novel “The Great Blondino” (1987) we get a friend in the dancer and avant-garde filmmaker Frans Eric von Fitzenstrahl and his many projects; his eruptive film arrangements and convulsive conquests of women and so much more.

Fitzenstrahl (called The Great Blondino) lives in a makeup lodge in a combined theatre & brothel in Paris with his books, his Bolex film camera and his clipboard.

He arranges experimental film screenings in a small neighbourhood salon with thirty projectors running simultaneously from all directions, the film can be seen everywhere, on walls, ceilings—on the heads of the audience! He seduces a great amount of women, the prima donna Erika von Herrlichhausen, the Finnish Lotta, the Latin American poetess Josefita Castrato…

Every now and then he improvises the Nobel Fake: He finds literary societies in the USA, Spain, Italy and in France pretending to be one of the members of the Swedish Academy who is out looking for Nobel Prize candidates. This way he gets large bribes to stay in the best hotels, to eat the most luxurious dinners & drink those…

His specialty as an avant-garde filmmaker is double exposures. And triple exposures and up to ten times the overlays on one and the same strip.

He travels to Cannes where he gets money to start one of the biggest avant-garde movie projects ever—with two hundred thousand extras! His movie is completely improvised, of course, without a script, even without film in the camera. What he does is spectacle, he stage-manages revolts!

The name of this pedal is our way of reminding & tributing Sture Dahlström and his incomparable novel "The Great Blondino" if you have not read it yet, ya go do it now! (So far only in Swedish language)

DELIVERED WITH THIS LITTLE SUPER STAR 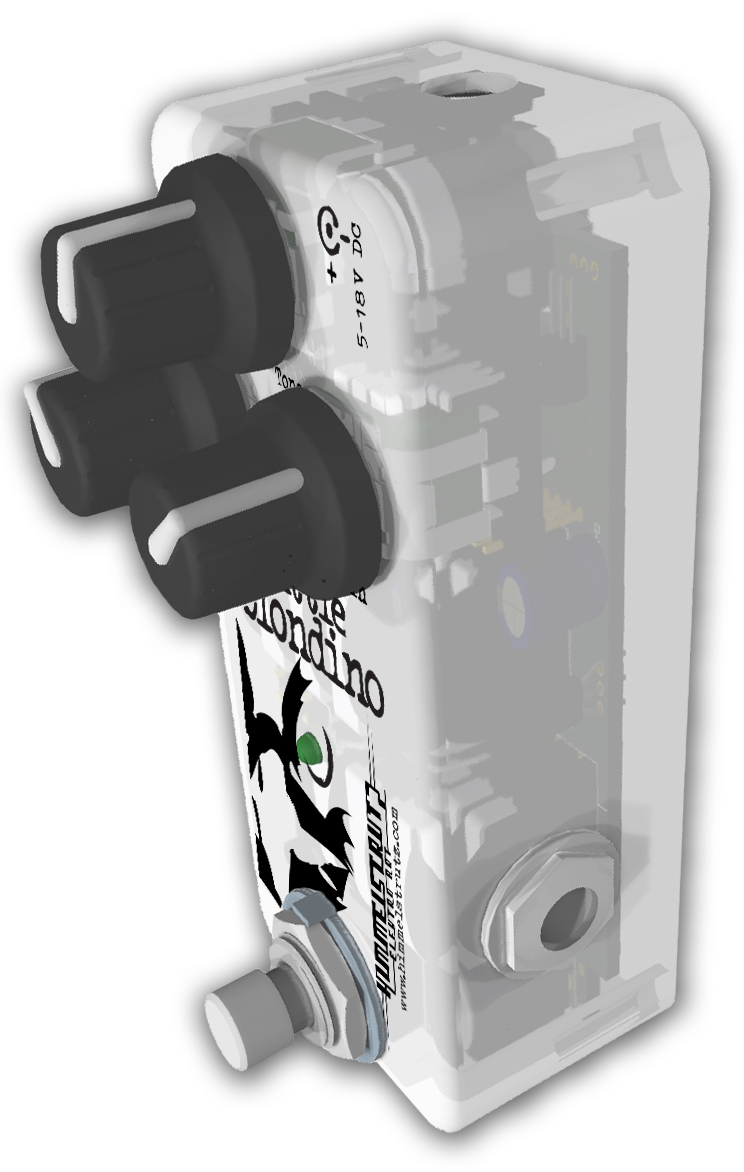 Screen print may be black, may be grey…

At Himmelstrutz Elektro Art each product and unit is handcrafted with the mission to release the best possible sound, feel and looks. For little blondino the print colour will be black or grey, by random, which means you have no option to choose this by yourself.
As our available range is not mass-produced every item is unique, minor appearance differences may occur, without compromising quality—in rare cases it could also be minor dings in the color or in the print of the boxes. Returns due to this kind of irregularity will not be approved.

A correctly typed shipping address WITH A WORKING TELEPHONE/MOBILE PHONE NUMBER (exactly how to be printed on the parcel) is needed to fulfil the order/shipping process. Finally: We normally ship the orders within 3 days from fulfilled payment. If you’re a worried person/in a hurry, please ask us about the shipping time before ordering. You don’t have to ask about the shipping price, as it’s free…